Janet Rose Stewart Hall - or Jenny as she was known - was born at home in Palmerston North on 19 October 1927.

Her father Ivan was a doctor and her mother Nan a nurse. She and her younger brother Stewart had a very happy childhood in Palmerston North. Her fatherâs surgery and consulting rooms were attached to their home, they had a spare section next door to graze their pony Peggy, and had wonderful visits to their grandparentsâ home in the country.

Jenny started school at the age of six at Carncott. Their headmistress was Dorothy Dudding, a Nga Tawa old girl. The girls all wore brown Nga Tawa uniforms and started learning French and Latin at the age of seven.

In 1935, war broke out and life changed. Ivan joined up, closed the surgery and moved the family to Wellington.Â  With frontline medical experience in the First World War he was made Assistant General of Medical Services.Â

With Ivan at Army headquarters, Jennyâs mother, Nan ran a first aid post on Molesworth Street and worked in the clearing stations on the dock which processed the wounded from the hospital ships arriving from the war.

Jenny loved Wellington. In 1942, after 18 happy months at school at Marsden, she caught the train to Marton to start school at Nga Tawa. She loved her five years at Nga Tawa despite having to cope with what is now recognized as dyslexia.Â  She recalled she spent a lot of time hiding in the loos so she didnât have to read out loud and found it strange that no one seemed to miss her or that she managed to pass any exams! But pass she did.

Nga Tawa at that time, with a school role of 150, had a brilliant academic record. The staff, apart from the French mistress, were all women, all English and very academic.Â

Jenny was proud of her Nga Tawa year group of 20 girls.Â  Her year produced two doctors, one senior law practitioner, one headmistress, one vice-chancellor, one PHD, four BSc (including Jenny) and two BA graduates.Â  Not bad for young women of the 1940s!

She recalled that during the war years the girls all had their big brown cloaks and a packed bag hanging on the back of their dorm doors in case of a raid. One alarm meant they would have to run and hide in trenches dug around the school.Â  If there were two alarms they were to run to a local farm and take shelter.

Many of Jennyâs Nga Tawa schoolmates remained her closest life-long friends â something which still rings true for Nga Tawa girls of all ages and generations.Â Â

Jenny finished school in 1946 and went to Victoria University to study science.Â  She loved university, (especially as she wasnât required to read out loud!).Â  Aside from physics, chemistry and biology her life was full of dances, parties, picnics, golf and the races.Â  Â Â

In her third year, she was employed by the University to teach dissection to the 1st and 2nd year zoology students and was very proud of her ability (inherited from her father) to be able to use a scalpel in both her right and left hands.Â

She finished University with a BSc and was offered a place to do medicine at Otago university but her father thought she wasnât strong enough.Â

Her compensation was a six-month trip to England sailing on the Rangatiki and it was on the return sailing home that she met a very dashing young Englishman called Peter Hall.Â  They became engaged and were married in August of 1951.

Over the next 30 years, Peter and Jenny lived and travelled all over the world as Peterâs career dictated: Hull in the UK, Dunedin (where her three children Julia, Sally and James were born), London, Dunedin again, Auckland, Sydney, Wellington, London again and then back to Wellington.Â

In 1978, Peter and Jenny bought the Karori Garden Centre as a retirement prospect.Â  Taking the reins, Jenny turned it into a great little business, using her brain and business smarts and bringing her passion for gardening to the commercial venture.Â

In later life Peter and Jenny moved to Waikanae and upon Peterâs death in 2014, Jenny moved back to her favourite city, Wellington to an apartment at Huntleigh Retirement Home.

Jenny got huge pleasure from the time she spent with her six grandchildren.Â  Three of her granddaughters, Georgie Caldwell and Annabel and Sophie Hall are Nga Tawa Old Girls and they spent much time with their grandmother talking about her school days, and theirs more recently.

Jennyâs was a life well-travelled, a life full of unfailing elegance and charm and a life full of many changes - all of which she faced with fortitude and great humour.Â Â

She is remembered as stylish, intelligent and articulate and as a devoted wife, friend, mother and grandmother. 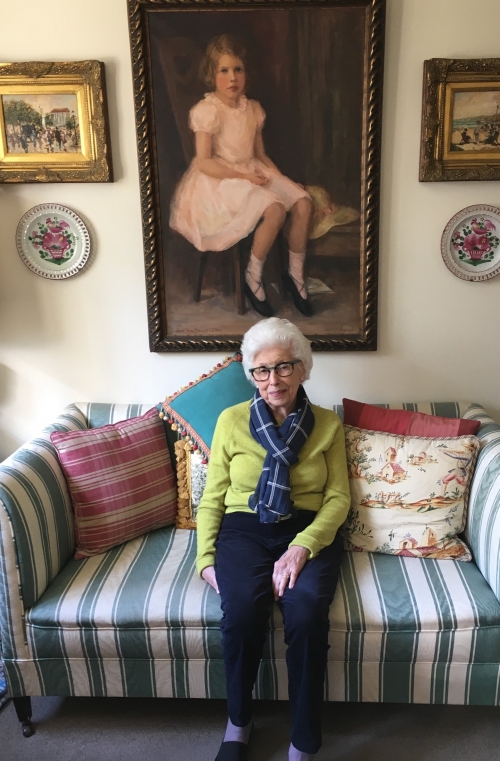