Marjorie was born on May 9th 1926 on aÂ farm in Waimate North, Northland, five hours by gravel road from Auckland.She was delivered on the kitchen table surrounded by the local Iwi, which some may say gave her a certain strength and determination that shaped her life in the years to come.

Marjorie's father Gerald Ferguson, had recently returned from his studies at Cambridge University, and married her Mother, Mimza Hellaby from Auckland. They settled into the challenging, remote Northland country life far from the cities that they had both come from. This also shaped Marjorie's life, as she went on to enjoy an engaging life and love for both theÂ country and later theÂ city.

In 1932 at the start of the depression, the family moved to Dunedin. Marjorie was aged 6 when she started at St Hilda's Collegiate School, and enjoyed experiencing the c?ity life andÂ riding her horseÂ aroundÂ Andersons Bay. TheÂ family lived beside her grandparents, Sir Lindo and LadyÂ Ferguson (known as May). They were a great influence in her life, and from whom she developed her love of the arts, charity and the South Island.

After primary school, she moved toÂ boardingÂ school at Nga Tawa Diocesan School in Marton to be closer to her Grandmother, Amy Hellaby in Auckland. Here she spent most school holidays. The country life at boarding school suited her, with more friends and greater opportunities to ride her horse,Â during a time of much turmoil with earthquakesÂ and the outbreak of World WarÂ II.

However, during this period, the trip to school from Dunedin was a long way by train, ferry, and another train to Marton, taking almost three days. Then with the advance of the War, Cook Strait became littered with mines and the ferry was at risk to be hit?,Â so her parents decided to sendÂ her from Dunedin to Wellington by plane. The Union Airways 14 seat Electra Aircraft, was one of the first commercial flight services in New Zealand. However, on the trip back to school on February 5th 1943, the plane crashed into Flagstaff Hill above Dunedin as she sat beside her lifelong friend Mary-Margaret Monro. Luckily all passengers survived despite being left on the mountain in thick fog for many hours before they were found. Following this traumatic experience in her life, she became a nervous air passenger, and thereafter her preferred mode of transport was by sea or car.

After leaving school, Marjorie worked in the Pathology Laboratory in the Otago University Medical School. While on a skiing trip to Coronet Peak in Queenstown, she met Ophthalmologist, Gair Macdonald, who soon became her much beloved husband at the age of 23.

As a youngÂ wife, thenÂ mother, she embraced many community roles includingÂ serving onÂ the Board of the Dunedin Art Gallery, St Hilda's school development, opening the historic home 'Olveston' to the public for the Dunedin City Council, and numerous charities. Marjorie always gave much energy and love into the tasks she embraced, withÂ the success of herÂ projects always reflecting her incredible talent. She was also very practical. Her ability to mow huge areas of grass into her early eighties and ease at reversing a trailer areÂ legendary!

Throughout this period, Marjorie loved houseÂ building and gardening projectsÂ while maintaining an active role in the art world, spending many decades balancing both a city and country life. Regular trips were taken with Gair to Ophthalmology conferences around the world, often by sea. Marjorie was also instrumental in ensuring that the family connection between her Grandfather, Sir Lindo and the New Zealand Ophthalmology Society was maintained.

In the early 1980's Marjorie and Gair moved to the country full time and developed a life of Horticulture and growing lavender and dried flowers at Woodbury, South Canterbury and then Loburn, North Canterbury. Since late 2011 she has lived in Auckland where she died aged 92. 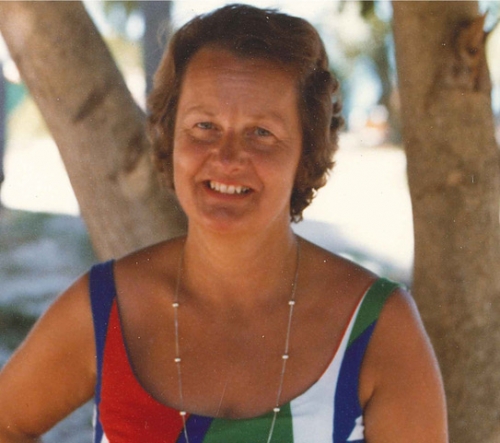